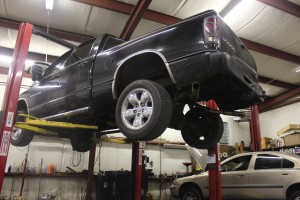 A car’s brake system has been improved and refined over the century or so since its inception. Today’s system in some ways resembles systems of the past but have become more reliable than ever before as technology has improved. Take for example the advent of the Anti-lock Braking System, eco-friendliness of organic brake pads and dependability of a pair of metallic brake pads. And to think: Where would we be without parking brakes? Consider how the power brake booster has allowed us to make the near universal transition away from drum brake repair to disc brake repair.

Almost all cars that come off of the line today carry at least one pair of disc brakes. Often times, there are two pairs, mounted and installed on the front and on the rear end. In some instances, a car might be fitted with a pair of drum brakes that function not by squeezing the rotor but by pushing the brakes against the inside of the rotor.

When you hit the brake pedal, you aren’t physically stopping the car with the power of your foot. The pressure forces the hydraulic fluid to pass through a series of tubes and hoses and the stoppage power is translated to the braking unit inside the wheels. The process involved requires an advanced understanding of hydraulic pressure, which can be studied here:

Occasionally, the hydraulic fluid can be exposed to air bubbles due to a faulty or cracked hose. This will reduce efficiency of the brakes. We can repair such an issue while respecting your budget and priorities.

Honda, Acura, Ford and Chevy makes have brake systems with their own standard of performance. May Brothers Automotive can order and provide the parts that are unique to your make and model.

Great motorcycle brakes will accomplish three things: provide good stopping power; have the properties of a well-vented mechanism in order to dissipate heat and; will be durable and long-lasting. Price is often the determining factor, but none of these should be sacrificed to save even a couple hundred dollars when buying in Hamilton County and Marion County.

Motorcycle brakes function much the same way that a car’s would, by a process of putting pressure on the pad to meet the disc which in turn creates a great amount of heat or friction in order for the bike to stop. Bike brakes are either drilled or slotted to allow the brake to vent and dissipate this heat. Unlike a car, the brakes on a motorcycle act independently of each other, and are controlled by a corresponding hand-operated control just as on a road bicycle. The front brake usually provides more stopping power, while the rear brake will slowly bring the bike to a stop.The front brake tends to be more effective; delivering the lion’s share of the stopping power, with the rear brake assisting to slow or stop the bike.